Leadership Insights from Women at Oracle

Encouraging a Generation in STEM - The Bloodhound Project 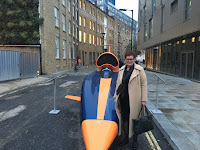 Interesting how STEM is such a vital topic in just about any WIT forum. Oracle takes the opportunity to sponsor initiatives to support STEM, such as The Bloodhound Project.  Oracle ACE Director Debra Lilley blogs about the initiative:

The Bloodhound Project is a truly inspirational initiative to inspire a generation in STEM.

Oracle are the Cloud partners for Bloodhound and I have been privileged to watch this this partnership develop and see how inspiring it is.

I have heard Sir Richard Noble, Andy Green (the driver) and Mark Chapman, Bloodhound SSC Chief Engineer all speak at various events and been inspired to get involved.


I truly believe the lack of women in STEM including IT is down to a lack of this encouragement from early in school. My own daughter decided on an office career in the Military and was told by her school it wasn't a job for a girl. That was only 10 years ago. 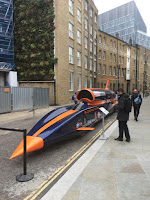 At the Oracle Cloud day in November, Mark Chapman spoke and told a story about the questions they get asked in schools. He said adults only ever ask questions they think they know the answer to but that children just ask away. He told of a child who when he had spoken about how far the car could go, asked what would happen if you put the car on it's end? He answered but it isn't supposed to do that, and again the child questioned, him 'but what if you did?'. He and their teacher then did the maths and although he did give an answer in his talk, I can only remember that it was 'past the moon'.

The Bloodhound charity, have little car kits they give away, where you build a Bloodhound model car and use a ballon to create the 'thrust'. I went to New Zealand and Australia that evening for the Oracle Development Community APAC Tour and had one of the kits in my suitcase. At the end of the tour I stayed with a friend in Perth, and her 5 and 7 year old grandsons came to visit. I told them about the car, and what it was trying to achieve. The 7 year old amazed me that he knew the concept of thrust, (although the 5 yer old told me he did too). We built the model, which I actually found a little hard (but then I am not technical), and we successfully got it to move across the floor.

The instructions said to think about how you could make it go faster? The boys thought about surface and we tried again and a marble work surface and several other places. 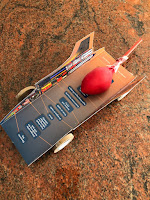 When I was explaining the concept to the boys, I told them about the 'how far will it go upwards?' question. I told them it would go further than the moon, and the 7 year old said 'Would it reach Mars?" followed immediately by 'It's about time someone worked out how to do that'.

I shared my little story with the UKOUG Welcome in IT breakfast, after Caroline Apsey the Oracle Bloodhound Evangelist told the Bloodhound story. I think a few more advocates were recruited there.

UKOUG also work with Oracle Academy who deliver content and training for academia and they have committed to inspire 3.5 MILLION students worldwide through this initiative, including Java training based on the Bloodhound data Oracle are making available to all.

Then just yesterday I received a message from my friend in Australia to tell me her grandson had taken the model we made to school and shared with his class. 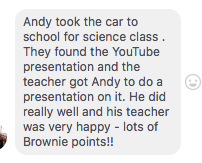 I only arrived home just this weekend with a second kit in my suitcase and intend to share it with a little boy at my church. His mum wants me to share it with his class. I'll get all the information and presentation from Caroline and would love to do this.

Well done Bloodhound. To me you have already succeeded.

Read more about the Bloodhound project: