The feats of Premier League players—the goals they score, the passes they make, the endurance they show—seem almost impossible at times. Now the football competition has partnered with Oracle to bring a new level of analysis during live broadcasts, giving the Premier League’s global fan base more ways to appreciate key moments of every match.

As the 2021/22 Premier League season kicks off in August, its unparalleled global audience will see “Match Insights—Powered by Oracle Cloud” in real-time during television broadcasts.

The broadcasts will include insights such as Win Probability based on years of match data, Momentum Tracking, which measures the likelihood of scoring based on a combination of historical and in-match data, and a formation tracker that follows team tactics as they evolve during a match.

“We are always looking at new ways to bring the Premier League to life and enhance the analysis of the competition,” says Premier League Chief Executive Richard Masters.

For Oracle, the idea of linking on-field moves and tactics with terabytes of historical data to spark new levels of wonder is exactly the kind of challenge that Oracle Cloud’s data experts relish, says Toby McAuliffe, Oracle’s senior director of sports analytics.

“The Premier League has a passionate fan base around the world, and we’re part of that fan base,” he says. McAuliffe is based in Seattle, Washington, where Premier League fans gather at pubs on game days (early in the mornings on the West Coast of North America) in their team colors of Leicester blue, Wolverhampton gold, Newcastle’s black and white stripes, and many others, to cheer their teams. It’s a ritual that plays out in big cities and tiny villages around the globe.

“We are always looking at new ways to bring the Premier League to life and enhance the analysis of the competition.” 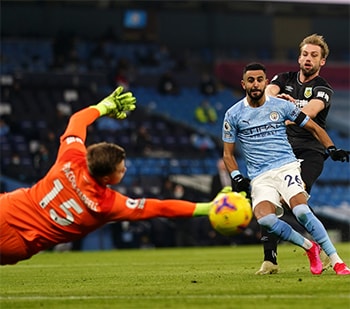 A player uses footwork and speed to overcome the odds.

“We’re thrilled that the Premier League has asked us to bring advanced analytics and insights into all of their broadcasts,” McAuliffe says. Using our cloud platform, “we’ll bring meaningful, fun, innovative insights to every match.”

So much data, so little time

Here’s how this will work. Oracle Cloud Infrastructure will take in real-time data from Premier League partners who use computer vision to track players’ every move on the field. Once in Oracle Cloud, machine learning models will go to work sifting data and uncovering insights, and then push those to broadcasters, mobile apps, and social media channels. 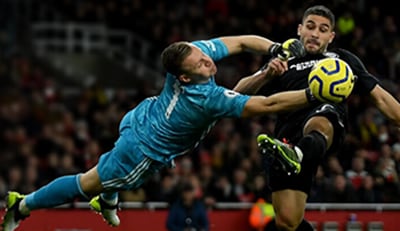 Split seconds count when players clash near the goal.

Premier League and Oracle teams are working together to develop those machine learning models and deliver analytics that fans will love. “We’ve got Oracle product managers involved, key members of our cloud infrastructure team, and some bona fide football experts within the company,” McAuliffe says. Beyond that, “we’re working closely with the Premier League to find the most interesting and useful angles to explore.”

The Premier League had a vision for in-game analytics, and it needed a technology partner to help execute it. “Oracle is a global brand with a great track record in driving innovation,” Masters says, “and we look forward to working together to bring new levels of engagement to fans around the world.”

Jeff Erickson is director of tech content at Oracle, as well as an avid open water swimmer and student of Zen meditation. Erickson has more than 15 years of experience writing for and about the smart, curious people who keep our digital world humming.

Behind The Numbers: Life As An Oracle Data Scientist