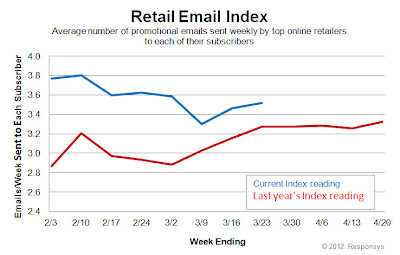 The Retail Email Index: The top online retailers sent each of their subscribers 3.5 promotional emails on average during the week ending Mar. 23, 2012. That’s up 2% week-over-week, down 3% from where it was four weeks ago, and up 7% year-over-year.

In recent weeks, year-over-year email volume growth has reset to a much slower growth rate. In January and February, email volume was up nearly 27% year over year; but over the past three weeks, it’s averaged just 9%. The reason for the decline is unclear, but it’s likely that the growth just wasn’t supported by its performance in terms of either positive metrics like sales and engagement or negative metrics like unsubscribe and complaint rates. 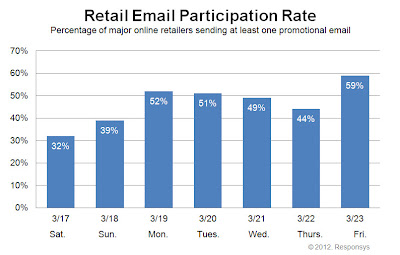 The Retail Email Seasonality Meter: On Friday we saw our first reference to Mother’s Day, which is on May 13 this year. The early Easter will the primary focus of promotional emails for the next couple of weeks, and then retailers will shift to Mother’s Day and, to a lesser extent, Earth Day. 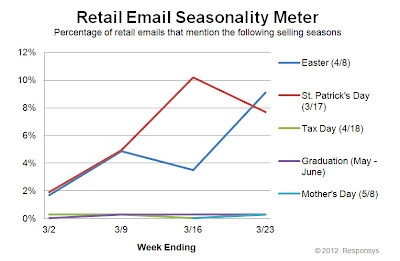