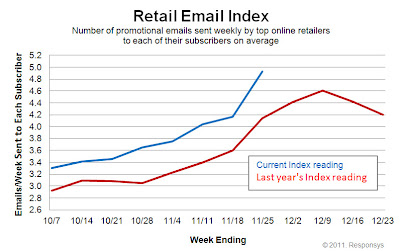 The Retail Email Index: The top online retailers sent each of their subscribers a new all-time high of 4.9 promotional emails on average during the week ending Nov. 25, 2011, eclipsing the previous record of 4.6 set last year at the height of the holiday season. That’s up 18% week-over-week, up 35% from where it was four weeks ago, and up 19% year-over-year. Weekly email volume should rise for another couple of weeks before starting to decline as the holiday season begins to wind down.

The Retail Email Participation Rate: Friday, which was Black Friday, was the most popular day to send retail emails last week. In fact, more retailers sent promotional email on Black Friday this year than on any other day on record.

This year’s Black Friday emails were much more focused on buying online than in past years, with even large store-based retailers like JCPenney and Office Depot promoting their online sales just as prominently as their in-store sales. “Avoiding crowds” and “skipping lines” were common messaging themes. This messaging bodes well for an extremely active Cyber Monday, which has been the busiest email marketing day of the year for four years running.

Big box retailers opening their stores on Thanksgiving last year has very quickly turned it into a highly promotional and hotly contested shopping day. This shift was also catalyzed by the rapid adoption of smartphones and tablets, which has made it much easier for consumers to shop after feasting at grandma’s house. While some may bemoan the creep of commercialism into this family holiday, there’s no putting the genie back in the bottle at this point. 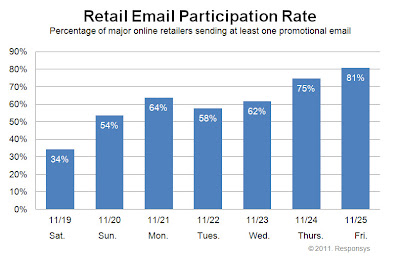 The Retail Email Seasonality Meter: There was a greater emphasis on Black Friday messaging last week compared to the same week last year. This year, 40% of retail emails during Black Friday week referenced Black Friday versus only 31% last year. 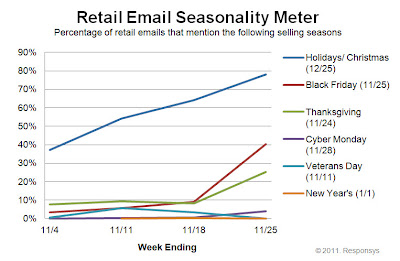