Week-End Trends: Fall retakes the lead from back to school 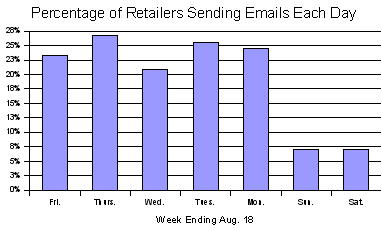 The 86 top retailers actively tracked by RetailEmail.Blogspot sent out 120 emails during the week ending Aug. 18 as part of their core email marketing campaigns. That was an decrease of 4% compared to the week before. Eighty percent of the retailers tracked sent out emails last week, up from 79% the week prior.

Fall collections: Nineteen emails about the fall season were sent last week by 14 retailers. That’s up from 15 emails from 12 retailers the week before.

Back to school: Sixteen emails about back to school were sent from 14 retailers last week. That’s down from 20 emails from 17 retailers the week prior.

Denim: The denim trend seems to be petering out, with only three emails sent about it last week from three retailers—Bluefly, J. Jill and Old Navy.

Last week there was one reference to Halloween—from Lillian Vernon, who continues to be the only one tooting that horn—and there were no references to Labor Day.