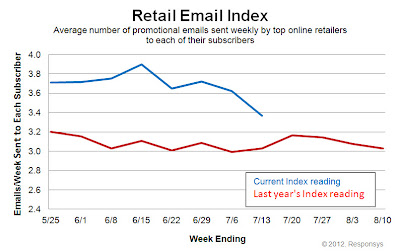 Email activity and seasonal trends during the past week:
The Retail Email Index: The top online retailers sent each of their subscribers 3.4 promotional emails on average during the week ending July 13, 2012. That’s down 7% week-over-week, down 14% from where it was four weeks ago, and up 11% year-over-year.
Email volume has been pretty erratic this year, up more than 20% year over year in January and February, barely up 10% in March and April, and then up around 20% in May and June. Given the rollercoaster changes, it’s difficult to ascribe any meaning to last week’s dip. 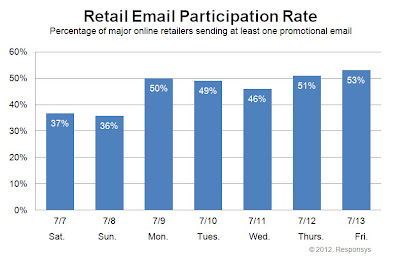 The Retail Email Seasonality Meter:Back-to-school messaging is off to a good start, despite 4th of July messaging extending into a second weekend because of the holiday falling on a Wednesday. We got our first reference to Christmas last week. “Christmas in July” and other early references likely won’t exceed 3% of messaging in any week this month, before dying down for August and then starting back up in September. 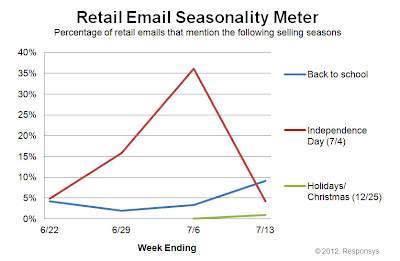