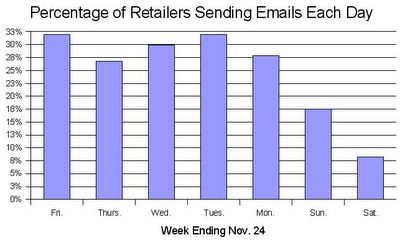 Email activity and promotional trends during the past week:

The 97 top retailers actively tracked by RetailEmail.Blogspot sent out 170 emails during the week ending Nov. 24 as part of their core email marketing campaigns. That was an increase of 2% compared to the week before, and up 13% compared to the 4-weeks-ago period. Eighty-six percent of the retailers tracked sent out emails last week, down from 91% the week prior, but up from 80% during the 4-weeks-ago period. Twenty-eight of the 97 retailers we track sent out more emails last week than the week before.

Christmas/Holidays: There so many emails about the holidays last week that we’ve given up trying to keep track of them all.

Thanksgiving: There were 40 emails about Thanksgiving, up from 14 during the week prior.

Fall: There were 2 emails about fall last week, down from 4 emails the week before.