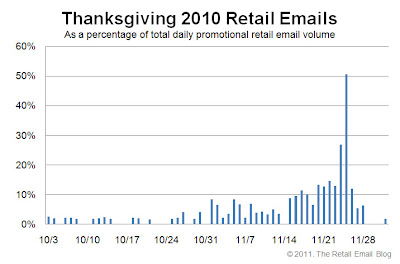 Start to finish: The first reference to Thanksgiving was on Oct. 3. The final reference was on Dec. 2.

The biggest day for Thanksgiving emails was Thanksgiving Day itself, Nov. 25, followed by Wednesday, Nov. 24. Retailers sent the majority of their Thanksgiving-themed emails after Nov. 9.

Most interesting email: This past Thanksgiving season was pretty dry, but on Nov. 15 Cooking.com sent an email promoting their Thanksgiving Scavenger Hunt that was interesting. The design looked eerily similar to the campaign Petco ran last summer (see Aug. 16 AM Inbox), which itself was surely inspired by Buy.com Tweet n Seek game (see June 25, 2009 AM Inbox). I’ve been openly skeptical of big, involved social media campaigns like this during the holiday season when consumers are so time-pressed, but perhaps this campaign got in just under the wire before the real crush of holiday shopping descended on everyone. 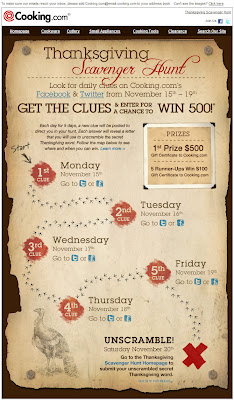