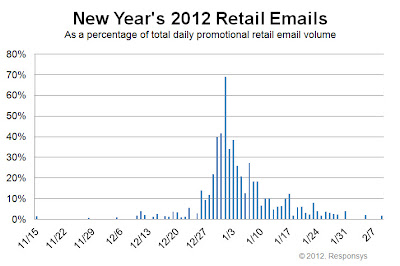 Start to finish: The first reference to New Year’s was on Nov. 15. The final reference was on Feb. 9.

The biggest day for New Year’s emails was New Year’s Day itself, Sunday, Jan. 1. Retailers sent the majority of their New Year’s-themed emails after Jan. 1.

Noteworthy trend: The most apparent trend this year was the decline of resolution-themed messaging. There was a lot less of it than in past years and what there was this year was more vague, featuring across-the-board discounts rather than inspiring subscribers with specific ideas and suggestions to better themselves. It’s possible that the longer-than-usual holiday season squeezed the planning for New Year’s messaging, making it shallower and less developed this year.

A second trend was a slight rise in “Happy New Year” emails. While emails that wish subscribers a Happy New Year aren’t as popular as season’s greetings emails, there’s potential there that might be going untapped. Because the days right around Christmas are high sales days, season’s greetings emails increasingly include promotional messaging. Because of the pressure for sales, the pure season’s greeting email is in decline. But those sales pressures aren’t nearly so high around New Year’s Day. That means that retailers could more easily follow the lead of Ann Taylor, Victoria’s Secret and others and send a message that’s entirely non-promotional and just about building the brand. An email like this is a great complement to that highly promotional season’s greeting email.

For instance, in a Dec. 31 email with the subject line “Happy New Year Wishes From Us, To You...,” Ann Taylor uses a letter-style design and highlights the charity work that ANN Cares has done over the course of the year. 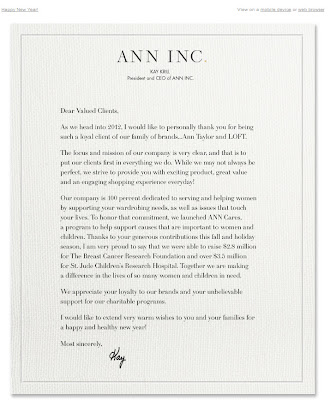 In a Dec. 31 email with the subject line “One Last Thing (Before The Clock Strikes Midnight)...,” Victoria’s Secret keeps the Happy New Year message simple and on brand. 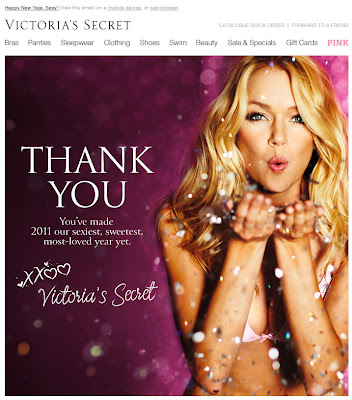