Retailers Get Festive for the Fourth 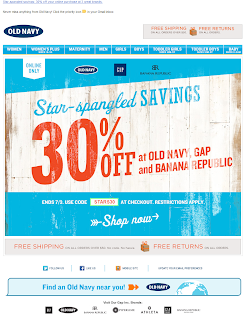 The Fourth of July is a tricky holiday for retailers: no one gives gifts, it’s not a big travel day and the traditional activities don’t require much shopping. Unless you own an (awesome) ecommerce business that just sells beer, meat and fireworks, you’re probably grasping for how to leverage the holiday in your email program. Well, you’re not alone! A lot of big brands got creative this year, inspiring me with their out-of-the-box messaging.

First up is Old Navy, who took a standard summer sale and gave it a patriotic bent. Adding a seasonal angle to a sales message isn’t news, but looky here: they changed the sender name to include their campaign, “Star-Spangled Savings.” I hadn’t thought much about how the sender name can be another space to add a bit of content, but it works nicely, don’t you think?
Old Navy Star-Spangled Savings, 7/1 -- It's Here: 30% Off at Old Navy, Gap & Banana Republic

Meanwhile, Williams-Sonoma came up with a clever way to mesh “sale” and “Independence Day” without forcing it: by offering discounts on products made in the USA. It’s a good move on Williams-Sonoma’s part, because not only will they attract shoppers by offering sale prices, but they may just attract principled shoppers (aka, very loyal customers).
Williams-Sonoma, 7/1 -- Last Day! Save 20% on American-M​ade Favorites 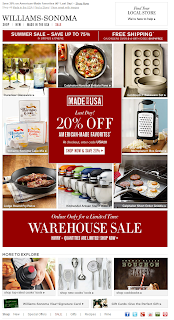 Finally, recipe site Epicurious gets to the meat of the matter with a Pinterest-centric email featuring TON of pinnable Fourth of July recipes. The email’s nothing much to look at, but the content and timing are spot on for targeting people in a hurry to plan their holiday barbecues. Plus, they include a fun contest to entice people to get the recipes up on Pinterest.
Epicurious, 7/2 -- Our Most Pinned July 4th Recipes 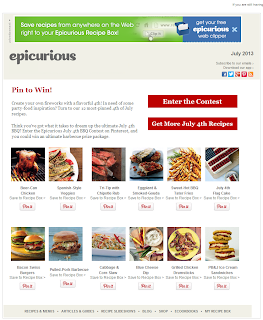 Anything sparking your interest this Fourth of July? Make your declaration in the comments!