AM Inbox: Letter from some person we assume you know 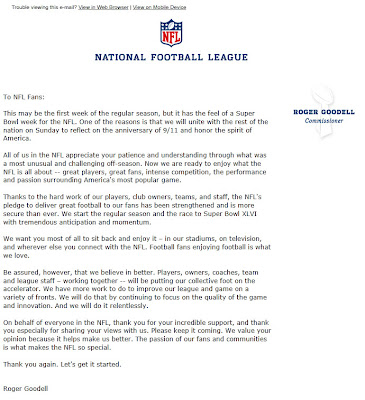 The Retail Email Blog monitors the email marketing campaigns of more than 100 top online retailers. Here are highlights from my inbox this morning:

Roger Goodell, 9/8 — Letter from Roger Goodell
For no good reason I opened this email rather than simply marking it as spam and flushing it into oblivion. It turns out that Roger Goodell is the commissioner of the NFL and that I received this email because of my NFLshop subscription. As I’ve warned in the past, it’s dangerous to mess around with your sender name. It’s like changing the name of your company. You’d only do that if you absolutely have to. If that reasoning doesn’t appeal to you, I ask you this: Which is better known—the NFL or Roger Goodell? Of course, it’s the NFL by a huge, huge margin—especially among casual fans like myself. This email might have seen higher open rates and lower spam complaints had they used the subject line to add even a little additional context rather than just repeating the sender name. Something like “Letter from the NFL Commissioner” probably would have improved results significantly.

NFLshop, 9/8 — New York Giants Fans - Celebrate The Beginning Of The Season With Free Shipping On All Orders!
The NFLshop has added a request for users of Gmail’s Priority Inbox to mark their emails as “important.” They added the request starting with a Sept. 3 email and are the first retailer I’ve seen make this request. Whitelisting requests are generally not a good use of valuable preheader space, so while novel, this is probably not an effective use either—at least not for more than a few emails. This request would have been more effective had NFLshop segmented their list by ISP. For instance, I received this email in a Yahoo Mail account, so the request was completely meaningless to me. Even using segmentation so only Gmail users see the request, the best place for such messaging is on the opt-in confirmation page and the welcome email.

Target, 9/8 — Cool kitchen stuff + home theater sale = happy home squared.
The messaging in this Target email is similar to the nesting and “staycation” messaging of 2008 and 2009. With times tough and the political discourse making folks more conscious of the weak economy, I expect that we’ll see more of this kind of messaging through the holiday season (at least).

Blair, 9/8 — Special buy at $9.99 plus free shipping
Just as I was a few weeks ago when I saw Costco apparently exploiting 9/11 to sell flags (see Aug. 15 AM Inbox), I was shocked to see this Blair email trying to capitalize on the somber anniversary by pitching keepsakes. Retailers would be wise to treat 9/11 like they treat Martin Luther King Jr. Day—which is to say not as an occasion to hold a sale or sell exploitive products, but as an opportunity for charity efforts. Target offers a nice example. They’ve used MLK Jr. Day as a call to service (see Jan. 14, 2010 AM Inbox) and have celebrated the holiday by sponsoring an episode of The Oprah Winfrey Show about Dr. King (see Jan. 22, 2008 AM Inbox). There are certainly the same opportunities around 9/11 to support first responders, veterans, medical research and cultural projects.