The Modern Marketing Blog covers the latest in marketing strategy, technology, and innovation. 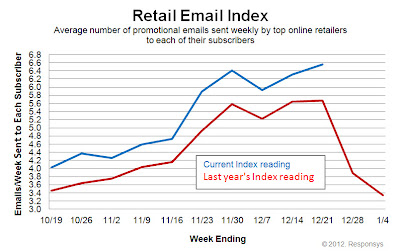 Looking to extend the online holiday shopping season as long as possible, major retailers once again made the week before Christmas the busiest week ever for promotional email volume.
The top online retailers sent each of their subscribers an all-time high of 6.6 promotional emails on average during the week ending Dec. 21, 2012. That’s up 4% versus the previous week and up 16% year-over-year.

Advancements in logistics have enabled retailers to process orders more quickly and get them to consumers’ doorsteps faster than ever before, which has in turn allowed retailers to extend the online holiday shopping season later and later. For the second straight year, the week before Christmas has been the busiest email marketing week of the year.
While Cyber Monday continues its long-running streak of being the busiest email marketing day of the year, this year Free Shipping Day (Monday, Dec. 17) was the second busiest and Green Monday (Dec. 10) the third busiest—beating out Black Friday and Thanksgiving Day, which were in the top three last year. This shows that retailers placed more emphasis on shopping days in December, particularly those toward the end when standard, expedited and express shipping deadlines hit.
Retailers are on track to send each of their subscribers an average of 211 promotional emails during 2012, which would be an increase of 19% over last year. During 2011, retail email volume increased 16% over 2010.
_____________________
BROWSE... Archive/ Post Categories/ Selling Seasons / Topics Covered / Retailers Tracked