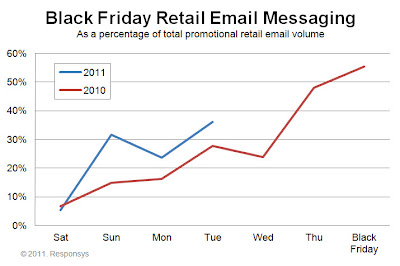 UPDATED on 11/23 with new data from Tuesday's retail email campaigns.

The spike in Black Friday week messaging follows a just slight increase in references to “Black Friday” during the first three weeks of November—or “Black November” messaging—which were up just 4% this year compared to 2010.

I was surprised that Black November messaging didn’t rise more this year, as retailers generally jump at opportunities to spur shopping earlier in the holiday season. That said, there was a huge expansion last year, so it’s possible that retailers pushed consumers too hard in a single year to change their shopping habits.