8x8 moves to Oracle Cloud Infrastructure from AWS and saves 80%.

If you ask Vik Verma, we’re living in the golden age of communications for all the wrong reasons. He talks often about using technologies such as videoconferencing linked to analytics to improve how businesses manage “the last mile” of communication with customers and employees, particularly during this pandemic. An affable man and charismatic speaker, Verma’s relaxed style is fitting for the CEO of 8x8, a Silicon Valley communications company. But it belies the pressure of an expensive decision he made near the beginning of the COVID-19 pandemic.

“We made a conscious choice to offer videoconferencing for free,” Verma says. The service was a new addition to 8x8’s line of enterprise communications and contact center technology. The company had acquired Jitsi videoconferencing from Atlassian in 2018 and launched Jitsi Meet in November 2019. Then the pandemic hit.

“I was stunned by the adoption,” he says.

In March 2020, their two offerings, 8x8 Video Meetings and open source–based Jitsi Meet, suddenly went from serving hundreds of thousands of monthly users to 20 million monthly active users worldwide. At peak, the company was supporting 1.5 petabytes a day of video data, equivalent to downloading 10 billion photos a day from Facebook. “I was also stunned with the cost of that adoption, particularly since most were using the service for free,” he says.

Heartwarming messages of gratitude poured in from such places as WeSchool in Italy, Every Child Pediatrics and Retreat Behavioral Health in the US, and Bionical Solutions in the UK. So did the bills.

“We have our own data centers, and we’re using other cloud providers. And the costs were just not making sense to us,” says Mehdi Salour, 8x8’s executive in charge of global network operations, data centers, and DevOps. The company began scouring the cloud market for a new partner.

“We started outreach to all the usual suspects—and Oracle Cloud Infrastructure stepped up in a big way for us. And we were, frankly, very surprised,” Salour says. “I can still remember two days into our discussions with Oracle Cloud Infrastructure, we had a discussion with our CEO and CPO. And I said, ‘Guys, I think it’s gonna be Oracle.’ They were like, ‘Really? Interesting.’”

The company lost no time in starting to move workloads, with Oracle teams working in unison. “Literally as we were speaking to Oracle’s team, we started the proof-of-concept process,” Salour says. “And four days after we signed the agreement, I had production traffic on Oracle Cloud Infrastructure.” That network egress traffic ended up costing 80% less than what 8x8 had been paying.

“Oracle was absolutely essential for us to continue to be able to provide these video services,” says Verma.

Verma is more relaxed since he “started writing a lot smaller check” for cloud operations, but he’s also sitting pretty on the impressive technology stack 8x8 has accumulated over the last decade. Those systems range from voice and videoconferencing to chat and contact centers, and the move to Oracle Cloud has resulted in performance improvements of more than 20%.

The most recent piece? Jitsi.org, the videoconferencing star of the moment, which 8x8 integrates into its unified cloud communications platform and offers to developers to embed into their own applications.

Jitsi is a set of Java- and WebRTC-based applications for secure videoconferencing, including Jitsi Videobridge and Jitsi Meet, plus tools for audio, dial-in, recording, and simulcasting. Jitsi also has a strong developer community supporting the open-source project. Perhaps the easiest way for software developers to get involved with Jitsi, beyond simply using it for free meetings, is to embed its easy-peasy JavaScript API into an application. That lets you open a secure video window hosted on meet.jit.si and running on Oracle Cloud Infrastructure. You can also run meetings on your own server or choose more full-featured options using 8x8’s paid platforms. Suddenly, that “last mile” of communication to employees or customers just got a little friendlier.

A big role for the humble video meeting

Emil Ivov, founder of Jitsi and now 8x8’s head of product for video and collaboration, thinks that the role of video in software has changed because of COVID-19.

“For a very long time, people have been designing enterprise applications that made the assumption that sooner or later you were going to meet physically,” he says. “Now that’s gone.”

20% The increase in performance improvements that resulted from the move to Oracle Cloud.

Traditionally, applications for enterprise resource planning, document collaboration, human resources, healthcare, and education were intended to help with a workflow. Now, Ivov says, it’s time to go further: “You can get so much more if you can embed the actual meeting in the process of whatever problem your meeting is solving. That is an opportunity, because a physical meeting is unparsable, right? You’re not getting anything out of it in an automated way.”

Instead, by using something like the Jitsi API, you can use the video medium over which the meeting is happening, and thus get information such as who joined, how long they talked, and even the content through transcriptions and imagery. “You can make your app more productive,” he says.

While Ivov agrees that today’s developers could find themselves in great demand if they learn to integrate video communications into their apps, he stresses that “you don’t have to be a communications specialist to use these APIs.” 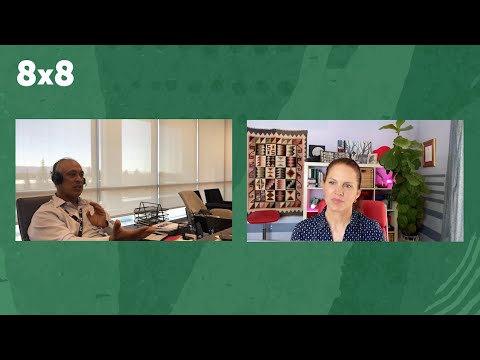 Silicon Valley companies used to be measured by their physical facilities, Verma notes: “Do I have this great building that looks like a spaceship, or this great cafeteria, or these beautiful campuses with bikes?” Today’s glass towers sit empty, but employees can still support each other globally and collaborate effectively, “as if they were sitting next to each other,” he says.

Verma thinks communications infrastructure will replace physical infrastructure. “People will increasingly make their decisions on which companies to go to in terms of how collaborative and connected a company is from an infrastructure perspective, as opposed to how beautiful the offices are,” he says.

For Verma and 8x8, this moment has been decades in the making. “We’ve had to reinvent ourselves,” he acknowledges. Starting as a chip company in the late 1990s, 8x8 transitioned to Voice over IP in the early and mid 2000s. Then, during five-plus years and after nine acquisitions, 8x8 became a full-featured communications platform provider, with complete applications for phone, videoconferencing, collaboration, and contact centers, all with underlying analytics and data.

“The future is now for us—because the world needs what we have,” Verma says. “We are this communications backbone that is now becoming the core for any company to connect, communicate, and collaborate with employees, customers, and partners. Increasingly, people will select companies that they work for based on the type and user interface of the communications infrastructure even more so than physical infrastructure like buildings.”

Alexa Weber Morales is director of developer content at Oracle. Morales is the former editor in chief of Software Development magazine and has more than 15 years of experience as a technology content strategist and journalist.

An Architect's Perspective: Applying Moore's Law to the Cloud

Want the Flexibility of a Cloud Database In Your Own Data Center?