This post was originally featured at the Oracle Underground BI & Dataviz Blog.

The value of a static repository variable is initialized inside the variable dialog interface of Oracle Analytics Cloud Admintool. The value then persists and does not change until an administrator decides to change it.
For example, you can define a static variable called Max_Age and assign a value to it. 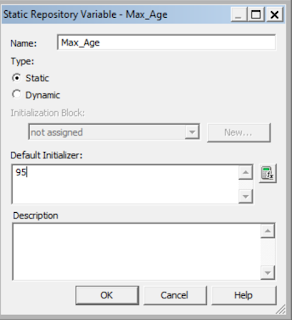 The syntax to access a static repository variable from any logical calculation or filter is as follows :

VALUEOF("<name_of_static_variable>"). In the case of the example it will be something like : 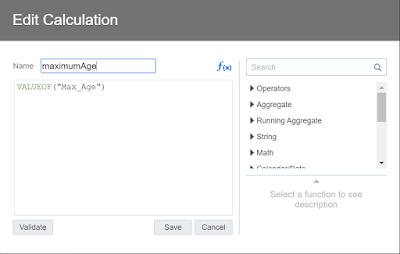 Dynamic repository variables in the same way as static variables, but the values are refreshed by data returned from pre-defined queries in the semantic layer (Repository) metadata. When defining a dynamic repository variable, one first creates an 'initialization block' that contains a specific SQL query. You also set up a schedule that the Oracle BI Server will follow to execute the query and periodically refresh the value of the variable.

For example, assume you have a table that contains information on various trips done by a cab service.

Now you have to keep track of the trip which has the traveled the longest distance. Distance is a metric that will be calculated using some spatial functions on the columns TRIP_START and TRIP_END.

Let us say that there are a few thousand records in your data, and so far the maximum distance is, say 1000 miles. Without using dynamic repository variables, you would describe the trip containing the longest distance with an expression such as: Trips.distance >= 1000

This content statement becomes invalid as new data is added to the recent source which might actually change the value of the maximum distance. Instead of modifying the variable definition manually, dynamic repository variables can be set up to do it automatically.

To create dynamic repository variables, you create both the dynamic variables and an initialization block, then match both together.

The first column returned by the above sql is the trip_id and the second column is the max distance. In our example, let's assign these values to two distinct dynamic repository variables :

Click on Edit Data Target and add two variables and name it Longest Trip and Maximum_Distance to associate with the query result. 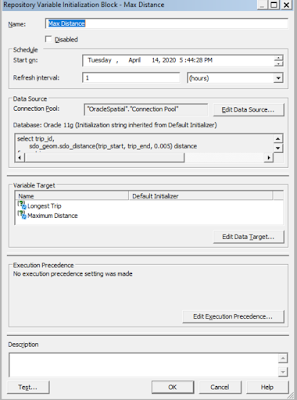 Create 2 custom calculations for the 2 dynamic repo variables with the following syntax:
VALUEOF("Longest Trip")
VALUEOF("Maximum_Distance")
and display it on a DV canvas. 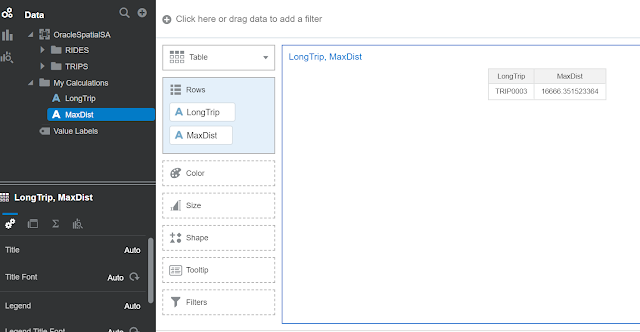 A common use of these variables is to set filters for use in Oracle Analytics. 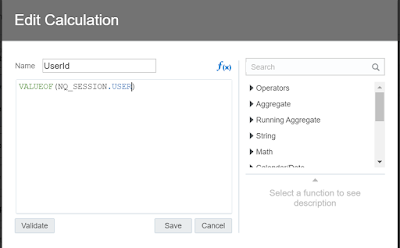 This is similar to syntax for repository variables but with prefacing their names with NQ_SESSION.

This syntax can be used as an argument for in any logical calculations, or custom filters. When dragging the custom calculation on to a DV canvas, the value of system session variable is seen.

The Oracle Analytics documentation will help you get an exhaustive list on all the system session variables along with their description.

These are system variables that an administrator can create using the Oracle BI Administration tool. They are part of the semantic layer of Oracle Analytics. The use of Session variable is wide, they are basically holding session based value that refresh everytime a user connects, using any particular predefined SQL. An example of non-system session variables could be to set user filters for example.

To define Non-System Session Variables, simply go to the variable manager in the admin tool and click on Action -> New -> Session -> Initialization block and replicate the one shown in the below diagram. 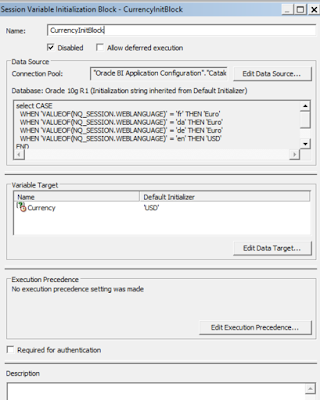 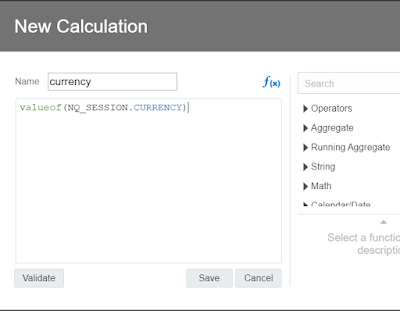 Drag and drop this calculation on a canvas to see the value of the currency variable set.

And to learn how you can benefit from Oracle Analytics, visit Oracle.com/analytics, and follow us on Twitter @OracleAnalytics.